The effect of climate change on biodiversity

The aim of this project was to create an interactive installation concept on the topic of diversity. I decided to focus on the effect of climate change on biodiversity – how the rise of global temperatures can offset the balance in various ecosystems and lead to the extinction of species. My work is a metaphor for several studies examining the effects of climate change and its threat to biodiversity. They predict that if temperatures keep rising, several species of animals and plants will either drastically decline in number or go extinct altogether. The concept combines mixed reality and physical props to make viewers experience the impact of climate change first-hand, both visually and emotionally. 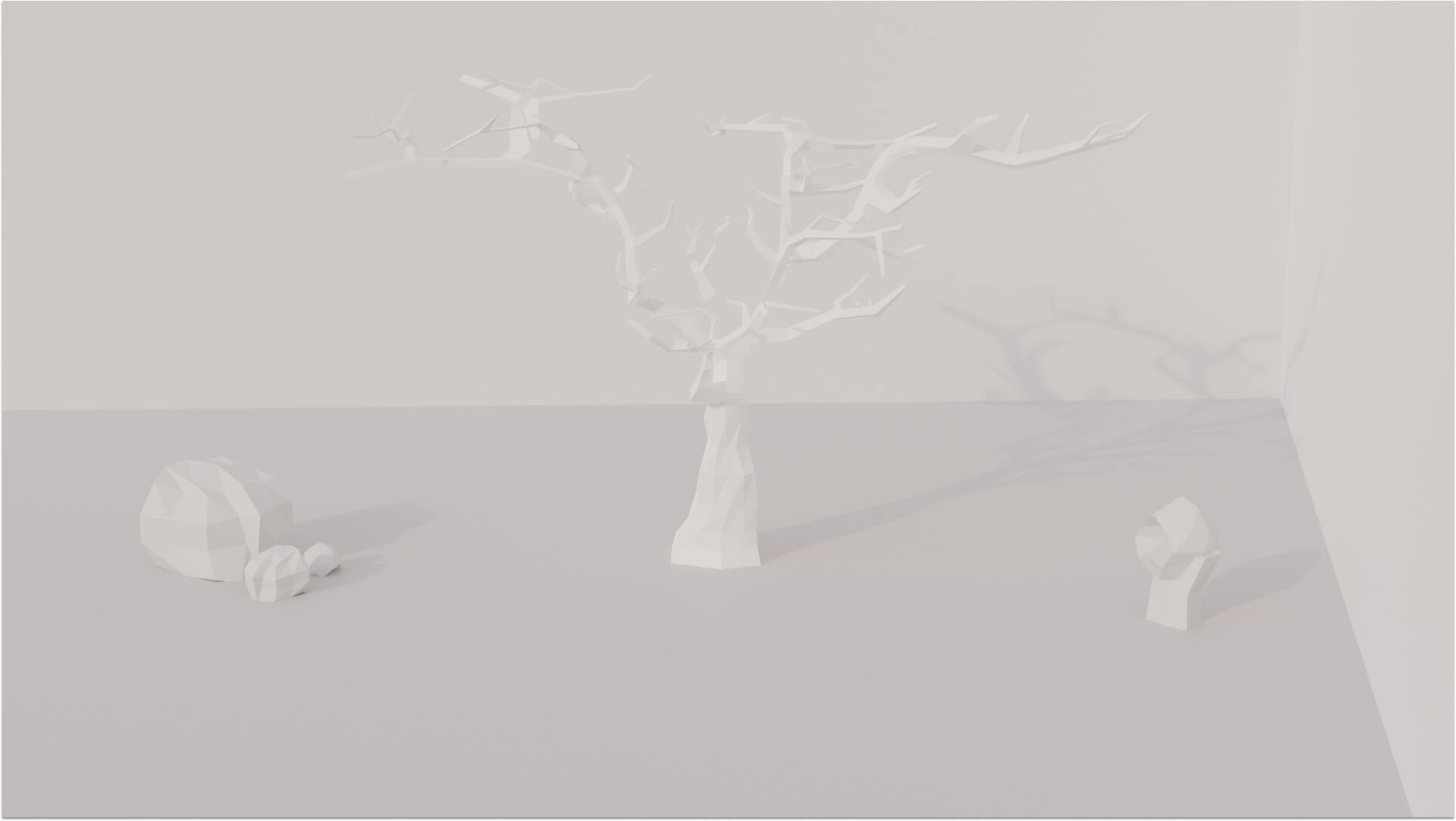 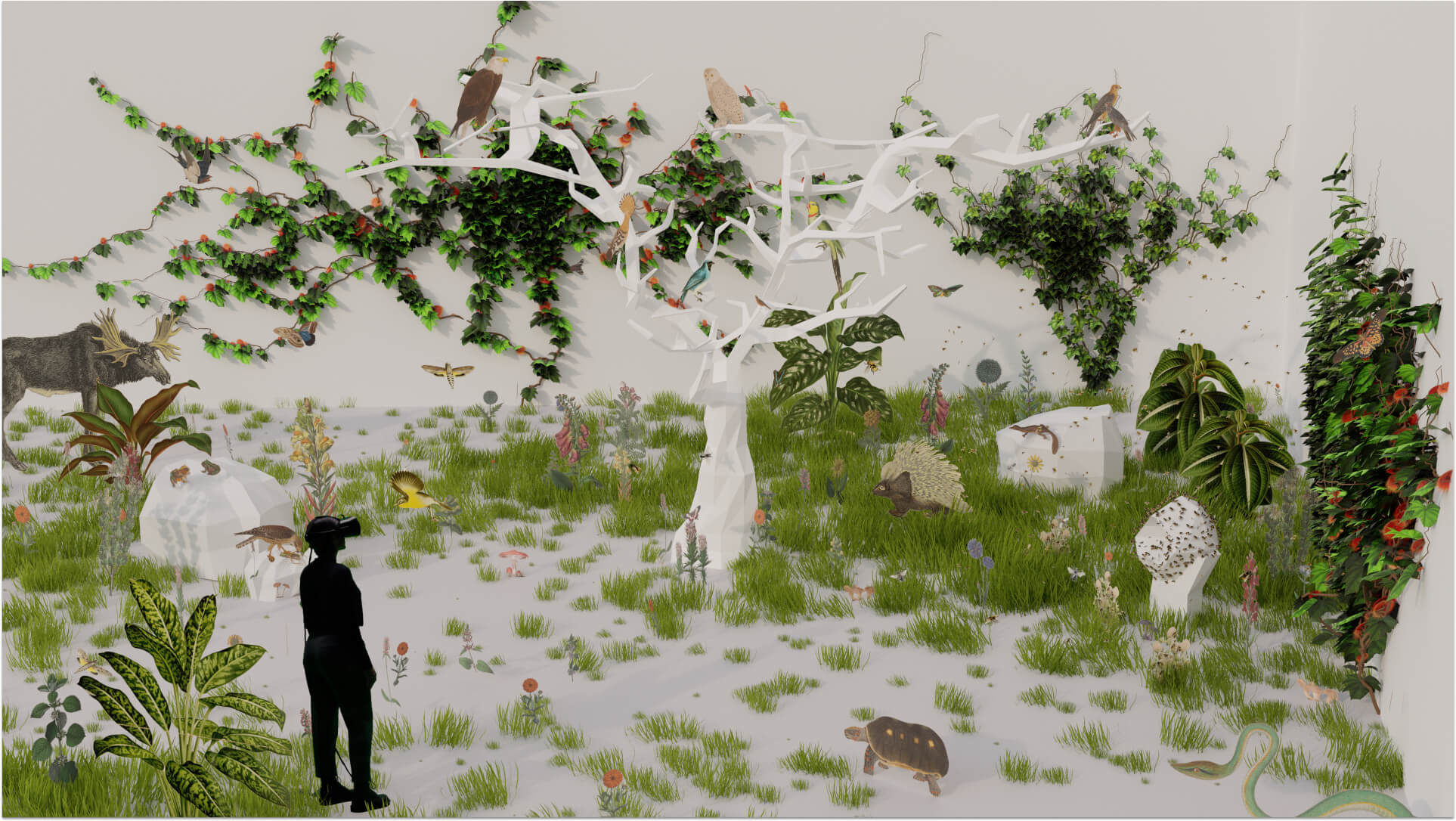 The gallery space appears quite hollow when the user first enters, with minimalistic, low poly rocks, a tree and a beehive. These look lifeless and static, which creates contrast to the subsequent mixed reality experience. Through the headset, the user sees the room come to life – with various plants on the ground and the walls, growing in front of their eyes, and animals appearing all around. The animals make use of the physical props – birds sit on tree branches, frogs and lizards crawl on rocks, and bees fly around the beehive. This grounded, mixed reality fusion immerses the user even further. 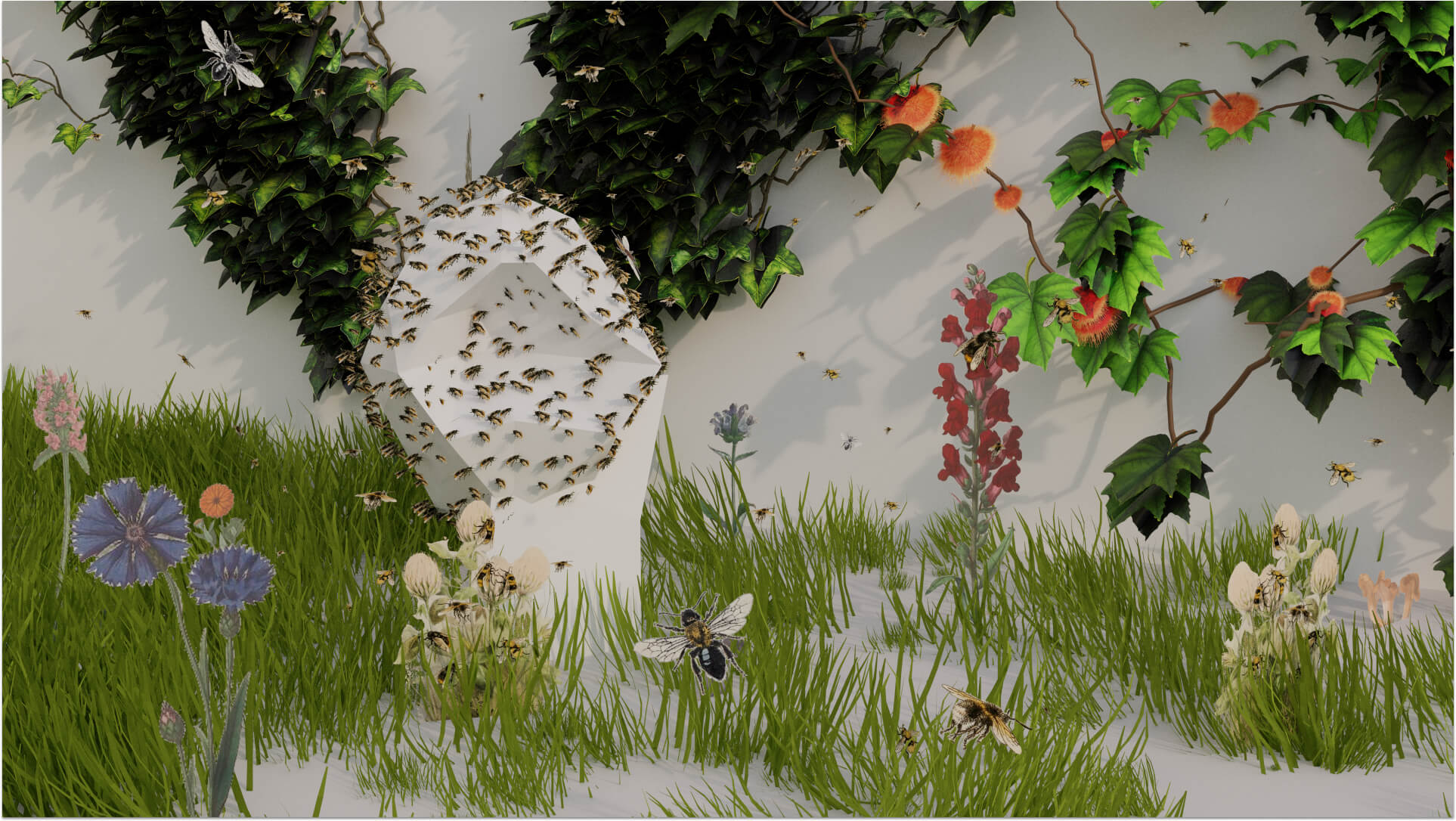 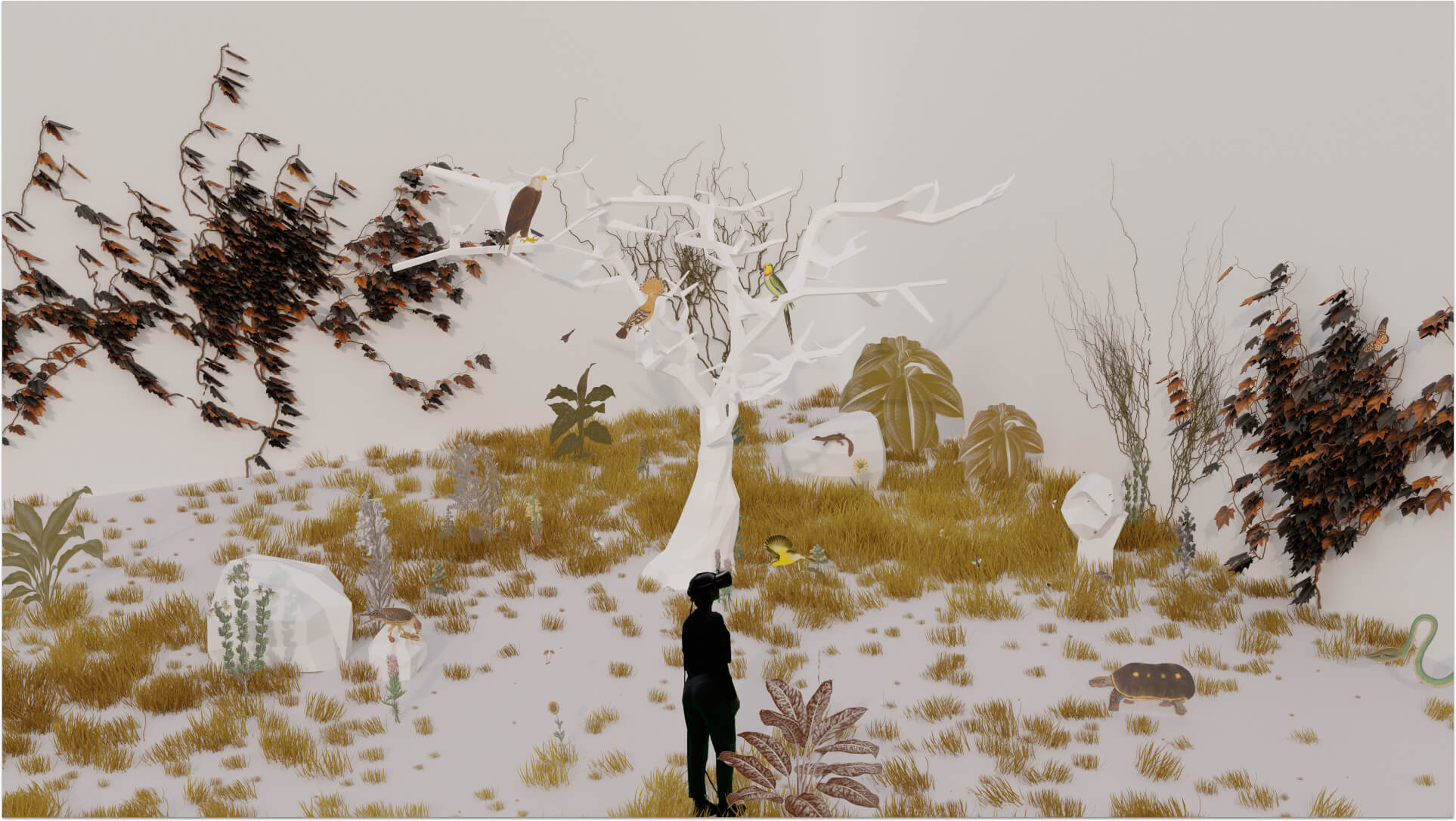 Here is where another key part of the interaction comes in. Apart from the mixed reality headset, the user also has a wearable watch-like interface, which shows the temperature of the environment. With each slight increase, animal species start to disappear, and their sounds go silent. Plants turn dry, yellow and brown, their flowers, leaves and fruits falling off, before disappearing altogether. Bees fall to the ground and birds stop chirping.

The whole room is slowly dying, just as real ecosystems get devastated by droughts, extinction and other disasters caused by climate change. In the end, the user is standing in a lifeless room once again, with only the remnants of wall plants and browned grass as company. The physical props no longer seem like minimalistic low poly representations of real objects, but more like gravestones of all the life that was in front of the user just moments ago. The emotional journey ends, giving the audience something to think about through visually expressing the urgency of the situation. 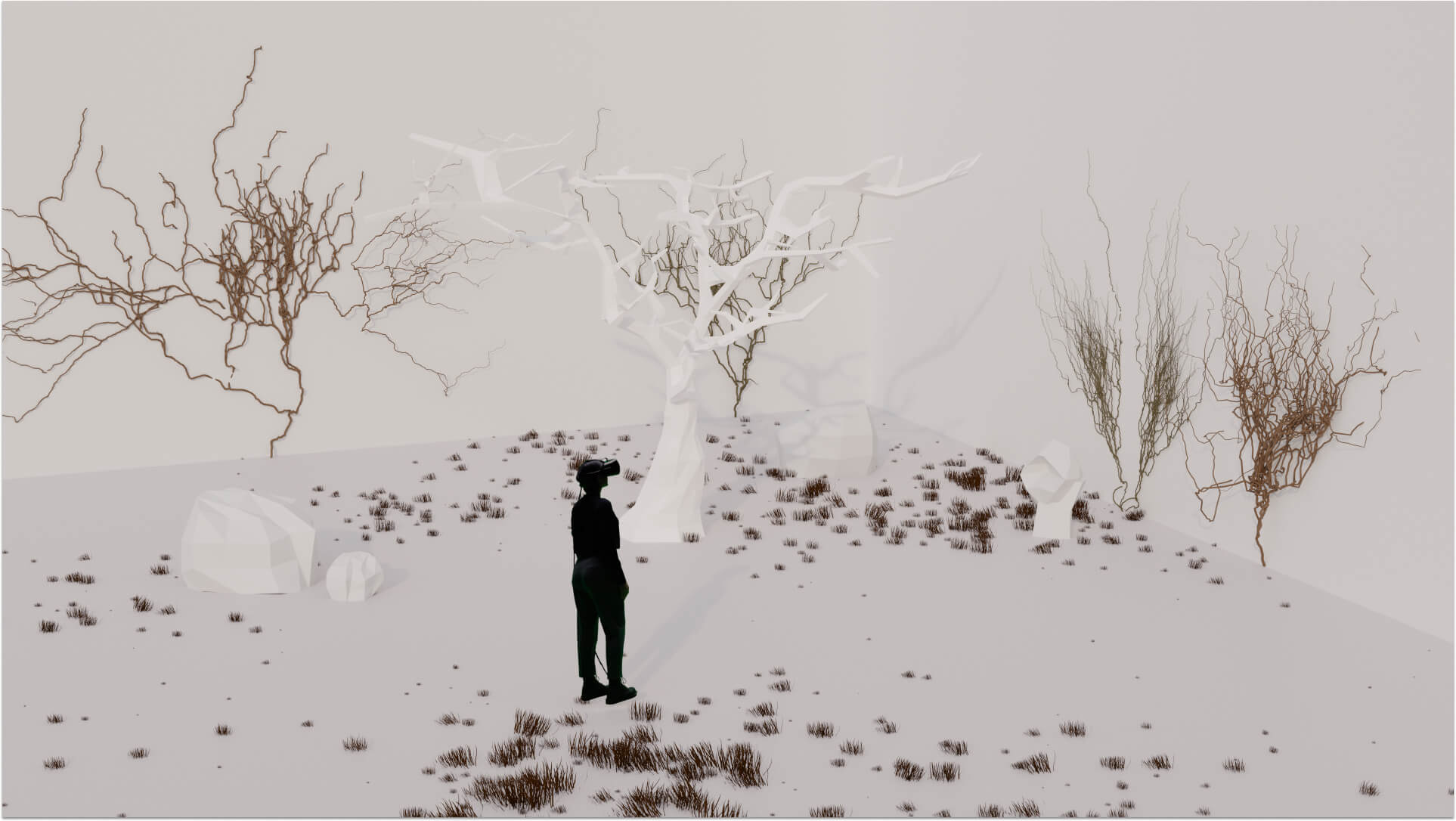